I was all ready to go to Shetland in May 2020 and in late March 2020 we still thought it would happen.  Of course it was postponed due to the Covid pandemic and later rescheduled for September 2020.  That date came and went as did the next reschedule in September 2021.  At that point it looked like it was never going to happen and I was so disappointed.  But in early summer of 2022, Fiona Duthie was able to pull it off and rescheduled it for just a few months later, September 2022.  Although many of the felters in the original group could unfortunately not commit given the short window, I decided I was without a doubt going to go.  And my original roommate Pam also committed to go.  We decided to not only be housemates in Shetland but to spend a few days in Glasgow, Scotland before the workshop and then extend the trip afterwards to visit Edinburgh and the Scottish highlands. 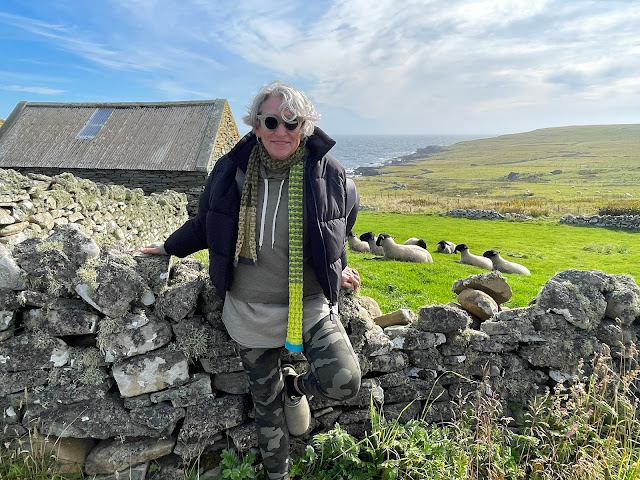 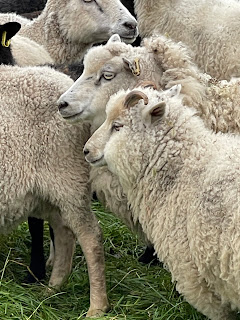 Pam and I arrived at the Shetland Samburgh airport via LoganAir from Glasgow on 8/31/22 and we were met by Fiona and Graham who drove us about 45 minutes to to our Air B&B in Lerwig which turns out was the former home of Fiona's grandmother.  Fiona showed us a photo of her as in infant in her grandmother lap in that said home.  Our classroom was in Lerwig, which is the largest town in Shetland with a population of 7,500, about half of the population of the whole island.
The first full day we spent taking a chartered bus to various places on the island to get familiar with this magical, textile rich place.  We visited the super cool shop called Nielanell owned by Niela, a contemporary knitwear designer. We later learned about Fair Isle knitting from Elizabeth.  We visited the Shetland Textile Museum and later to an organic sheep farm where our host Ronnie Eunson talked to us about native Shetland Sheep.  We were able to get our hands into the fleeces that we would be using in our felting projects.  The landscape is gorgeous with stone walls, green as far as the eye can see, the gray North Sea, the winter, the smokey peet fires,  super friendly people, so many sheep, darling Shetland ponies, the delicious fresh seafood.  I took it all in and it would be the inspiration for the felted piece I would create in the 2 ½ days in the classroom. 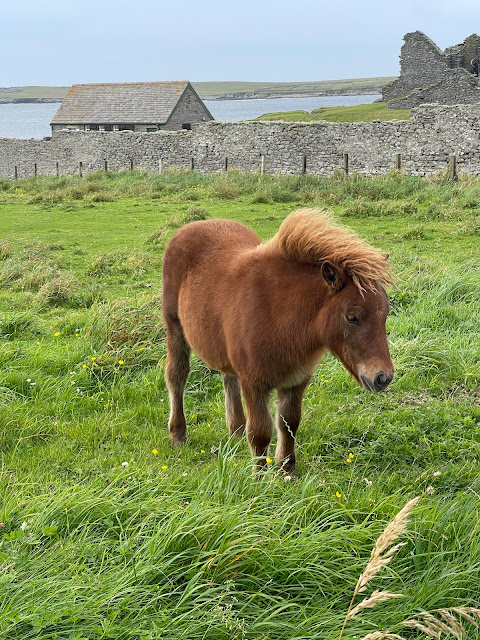 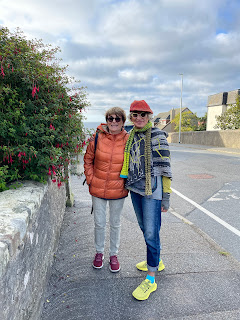 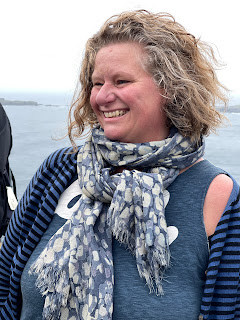 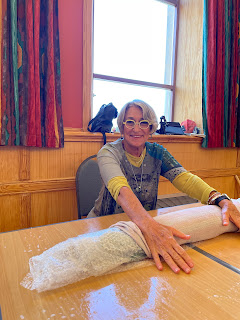 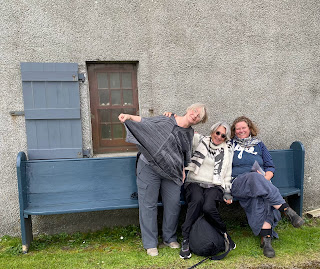 Over the next several days (total of a week in Shetland), we visited many other sites including the Croft House Museum on the coast of Boddam; Jarlshof, the best known prehistoric archeological site in Shetland; the Sumburgh Head Lighthouse with its incredible views, St. Ninian's Isle, a large tombolo (a natural sand causeway with sea on either side) on the west coast of Shetland, linking the South Mainland with the Isle;  Eshaness, the western tip of the main island (called Mainland) which has some of the most spectacular coastal scenery in Shetland and is in the opening credits of the Shetland series where Jimmy Perez is looking out.
Shetland is truly remarkable and I am so glad to have this opportunity to not only felt with Fiona Duthie and the other amazing women but to have my senses piqued which is something we have missed these past few Zoom years. The scent of the peat fire in the Croft house was glorious. 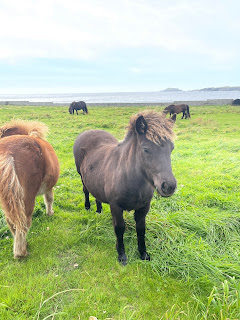 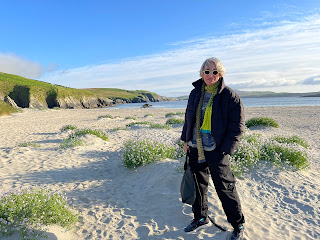 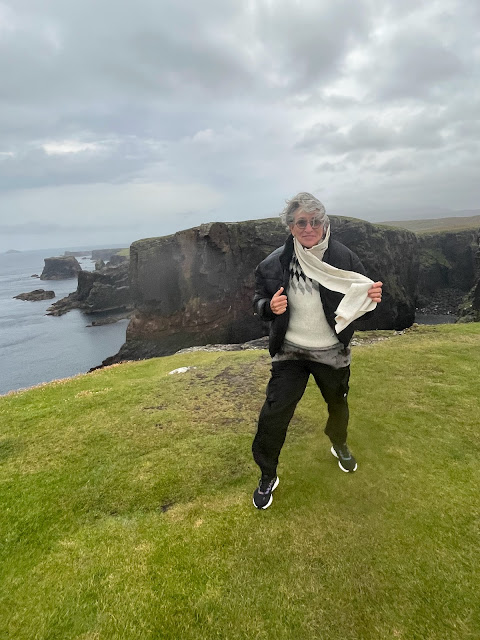 My 3D felted piece was inspired by the undulating landscape, the peat bogs, the stone walls, the North Sea and of course the textiles. I incorporated the textiles of Shetland in my project which included fair isle knitting, tweed, lace, twine and Shetland wool in the form of fleece, roving and yarn. It also includes kozo paper and found objects from my walk on St. Ninian’s Isle including small stones and hard seaweed, the large piece of seaweed is reminisce of a Viking ship. How to get it home I had to flatten it and later reshape it and tack down the seaweed with Shetland yarn and rusty wire which was also an inspiration. 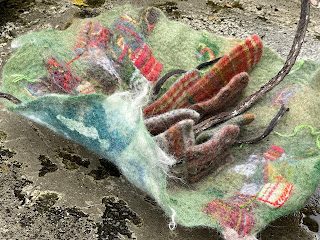 Shetland is truly remarkable and I am so glad to have this opportunity to not only felt with Fiona Duthie and the other amazing women but to have my senses piqued which is something we have missed these past few Zoom years. The scent of the peet fires and the incredible winds will stay in my bones forever. 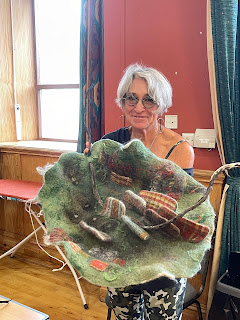 Once home, I finished my Shetland felted project by shrinking it a bit more, forming it to my liking and attaching the seaweed that I found at the beach at St. Ninian's Isle with steel wire that should rust over time. It will grace my front door and be a constant reminder of my amazing experience in Shetland. 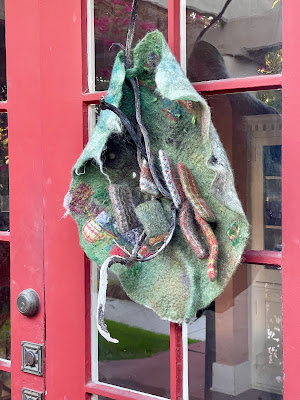 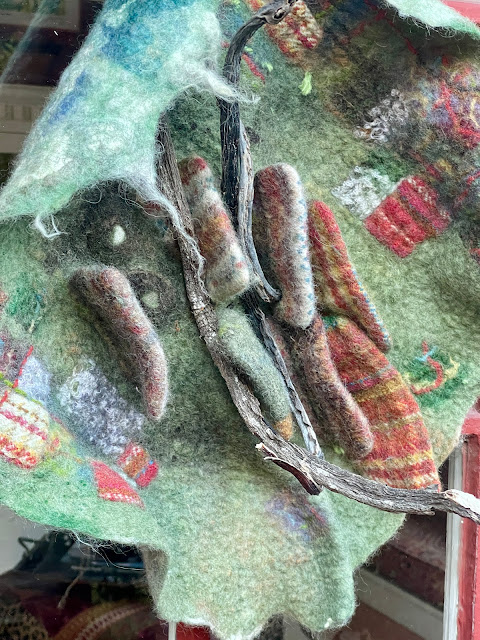 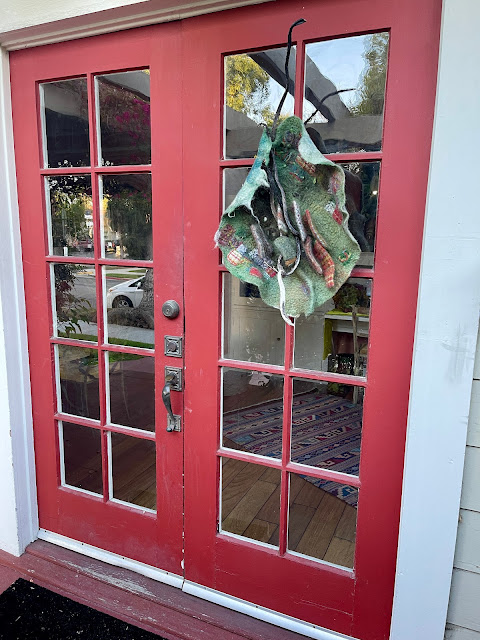