Cuba Thru My Lens from Beth Marx on Vimeo.

This five minute video is a compilation of real Cuba as seen from my lens.  For a longer version of the video (12 minutes) including our group - the Baja Bush Pilots, click HERE. 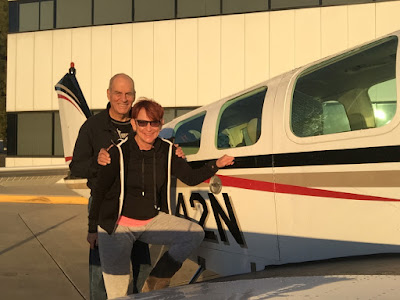 In late Decembers 2015 Joe and I took off from Long Beach, CA in his single engine Bonanza to join the Baja Bush Pilot (BBP)group in Key West, Florida for one of the very first caravans of private planes to fly from the USA to Cuba since 1959. 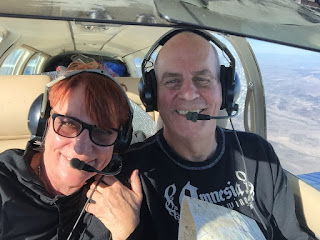 We flew leisurely from California to Key West with several overnight stops along the way. We celebrated a quiet, comfortable NYE in our room at the Hotel Contessa on the San Antonio River-walk eating pizza 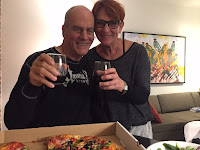 and drinking wine while vicariously partying at Times Square with Anderson Cooper and Kathy Griffin.  Our visit of course included the requisite tour of the Alamo and a guided boat ride complete with a cadre of Oregon duck fans psyching up for the battle at the Alamo bowl between them and TCU. 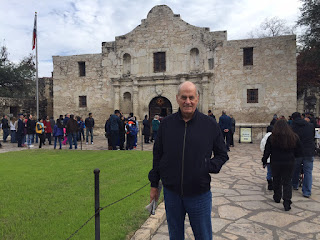 The next night we stayed at Coombs House Inn, an elegant victorian B&B in Apalachicola, FL the oyster capital of the world, and on New Year's Day we enjoyed our fill of oysters at the Owl's Nest Restaurant, a short walk from the inn.

More fun and great eats on our next few Florida overnights including wood fired Caesar salad at the Firestone Grill in Fort Myers, FL and an outstanding fish dinner at Seven Fish as well as the best fish tacos ever at Garbo's Grill, both in Key West and recommended by my BFF Phyllis. 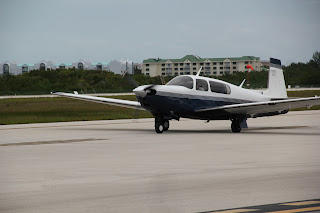 On January 5th, we met up with the other eight pilots and crews in planes as varied as a Meridian prop-jet and an old twin engine Beech for a one hour rainy, mostly zero visibility flight from Key West, FL to Cienfuegos, Cuba. Upon landing we exchanged some U.S. Dollars for Cuban Convertible Pesos(CUCs - pronounced kooks), a one for one value less a 13% exchange fee.

We knew that we could not use ATMs or credit cards in Cuba so we brought along plenty of cash. The landing fee alone was an exorbitant $270 for each plane, which had to be paid in CUCs, sharply contrasting with an average $25 landing fee in the USA.

After a lengthy but scenic taxi ride passing several horse and buggies long the way, we arrived at Hotel Jugua, a late 50's boxy, high-rise hotel with clean, comfortable but dated rooms albeit with gorgeous views. After unpacking and some R&R, the 26 in our group assembled in the hotel lobby for a short walk to our first paladar, a private restaurant in a home.  Here we relaxed over mojitos and a delicious meal whole getting to know each other by taking about planes and exchanging flying and travel adventures. 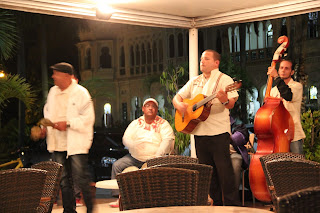 Later in our room and despite the blaring music (which we had earlier throughly enjoyed on the patio), the worn towels & sheets, and broken 1970's TV, Joe and I were happy to be part of this adventure in Cuba.

The next morning Claudia, the BBP group coordinator introduced us to Jose, aka Pepe, a young cute but cocky Havana local who was to be our guide for our week in Cuba. However after many issues, Claudia ended firing him just a few days later.  In the meantime, Jack our BBP leader had taken a long taxi ride to Havana to arrange for our lodging in "casa particulars", which are apartments or rooms in homes, that apparently cannot be pre-booked. As we were to discover time and time again, this was all part of the adventure of Americans traveling in Cuba

On our first morning in Cienfuegos, we visited a local cemetery and learned about the local religion called Santeria, a mix of Catholicism and the Yoruba practices of African slaves. We were told about the ceremonial custom of exhuming the body after two years, cleaning the bones and repackaging them in a small box to be reburied in a above ground shared crypt. The story is that some widows finally came to realize how quite the Casanova their late husband had been upon discovering so many unknown women at his bone cleansing ceremony!

Later in the day we traveled in an old boat to a well preserved 18th century fort used as a museum.  Of interest was a large model of a nuclear power plant that the Soviet Union had sponsored but never completed prior to the collapse of USSR.  Lunch at an outdoor patio restaurant was good and we were relieved to be served seafood after seeing two guys scurrying past us each carrying two legs of an upside down bleating goat.

Dinner at our second paladar in Cienfuegos of overcooked fish and pork, which both looked pretty much the same, wasn't nearly as good as the first although it had seemed promising after starters of a fruit smoothly and vegetable soup.  But we had a delightful time getting to know our group all of whom were affable, interesting and obviously with a great sense of spirit and adventure.  Dr. John, 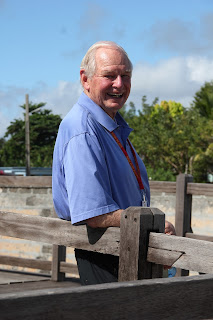 an 83 year old retired orthopedic surgeon, piloting his Cessna 182 and traveling with his nephew John, a journalist, was telling amazing stories including his adventures of flying over the Atlantic from the USA to London in a small Cessna 172 equipped with enhanced internal fuel tanks.

Our side trip to the old, colonial town of Trinidad was delightful.  Chipped pastel plaster homes furnished with old crystal chandeliers and patined mahogany furniture dotted the worn cobblestone streets. Here we had our best meal, a seafood Veracruz with all the trimmings while congregating together at two large tables in adjoining rooms in a beautifully shabby chic home. The musicians surprised Paula, one of the Texan women in our group, with a Cuban rendition of happy birthday and we all sang while the waiter served her a special dessert with a flaming candle.

Outside the dining room window we were entertained by a living bronze statute which we had sworn was a real sculpture until someone put a coin in his box and he started to move. We were later to see equally amazing and entertaining silver, copper and ceramic live statues.

Climbing the narrow stairway to the museum rooftop; visiting local artists in their galleries;listening to amazing Cuba music, and peeping into doorways & windows offered some absolutely incredible photographic compositions of Trinidad. 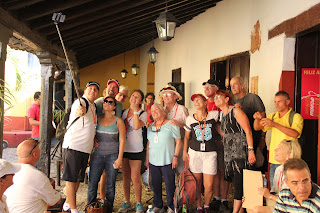 Takeoff in dicey weather from Cienfuegos to Havana's Jose Marti Airport was several hours later than planned. The zero visibility flight was extremely turbulent and my heart was in my hands most of the time but of course Joe, being such an experienced pilot, was completely in control.

After minor delays at the airport in Havana, we took a 40 minute taxi ride for 25 CUCs to Five Points, our agreed upon location in Habana Viejo (old Havana) where we met up with Jack, the BBP lead, who among confusion with his back-pack having just being stolen, assigned and showed us the location of our "casa particular". We were surprised to learn that the hotels, all of which are government controlled and certainly modest in accommodations, are filled to capacity for the next few years with overnight lodging at a steep $400 per night.  But lucky for us and so many tourists, many residents in Havana Viejo rent rooms to supplement their very modest income.

Schlepping our luggage the short distance to our home for the next three nights at #13 Agacate, we were greeted by our friendly hosts David and Electra. Our casa was one of the better ones with a comfortable sitting room adorned with David's innovative large hand made ceramic hobbit houses, a kitchenette and a decent clean bedroom and bath. After settling in we walked and explored the old city and later enjoyed a delicious meal on the rooftop restaurant of Hotel Ambos Mundos serviced by an old Otis elevator and operated by an equally old attendant.

Salsa lessons; the amazing camera obscura, one of only 24 remaining in the world; the music, dancers and costumed stilt walkers in St. Francis Square - we took it all in, the good the bad and the ugly. And we made sure to carry our own TP or equivalent and to have a few coins available to pay for public restroom usage.

Evening festivities included the world famous show at the Tropicana which did not disappoint but dinner there could have been missed for tastier fare elsewhere.

Our scheduled tour of a tobacco factory had fallen through since Jose, the since fired tour guide, had apparently failed to secure the reservations.  I had a NY Times article with me that recommended the best place in Havana to buy authentic and quality cigars so I organized a smaller group of us who were interested.  The cigar shop was located upstairs in the nine room Hotel Conde de Villanueva near the corner of Mercaderes and Amagura Streets. The place was Hemingwayesque with worn leather recliners in a dark green atrium adorned with live peacocks.  His photograph was just one of the many satisfied customers that lined the upstairs hallway along with Fidel Castro, Groucho Marx, Winston Churchill, Denzel Washington, Michael Douglas and Demi Moore. Americans are each allowed to bring back $100 in cigars with the average cobana costing $10.

After leaving the cigar shop, we discovered it was pouring rain so we scrapped our plans of riding a ferry to Guanabacoa, a non tourist African influenced area where John, the journalist in our group had suggested going after missing the opportunity on a prior visit years ago.  Instead we headed for cover inside a snack bar to reassess plans over cocktails and beers. Despite the rain, John and I decided to take a taxi to Guanabacoa while the rest of the group disbanded or stayed put to continue drinking.  In our very broken Spanish, we negotiated a 20 CUC round trip fare and enjoyed our ride in one of the many 1950's classic cars.


Unfortunately the African museum was closed but we explored this very poor community with friendly locals none of whom asked for a handout, unlike many in Havana.  On the drive back to Havana, the driver had to stop home to refuel his car. As he was doing so from a pail, I got out and walked the short distance back to the park he had just indicated was an area of good cell overage and thus the reason for all the cars and congregated groups.  Folks taking selfies, texting and talking on their cell phones were only too happy, without me even asking, to pose for my camera. 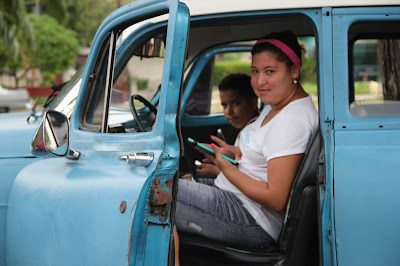 Of course my favorite thing to do in Cuba was to take photos since the vibrantly dressed locals, the 1950 American cars, the old pastel buildings, and the elegantly worn interiors make for outstanding compositions.  I am so glad to have been part of such an outstanding group of trailblazers and despite the less than perfect flying and ground conditions,  I would gladly fly there again, with Joe at the controls, to further experience this colorful country of contrasts. 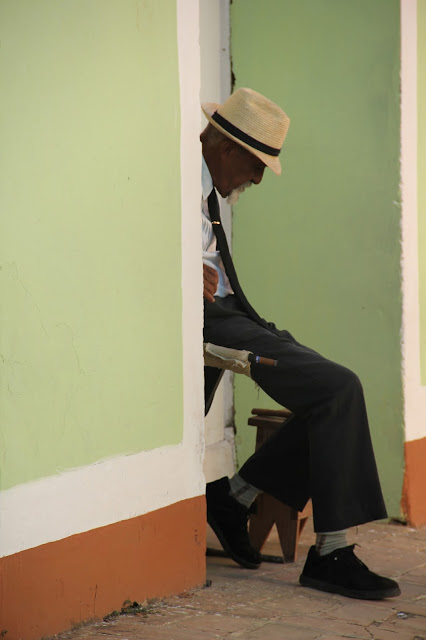 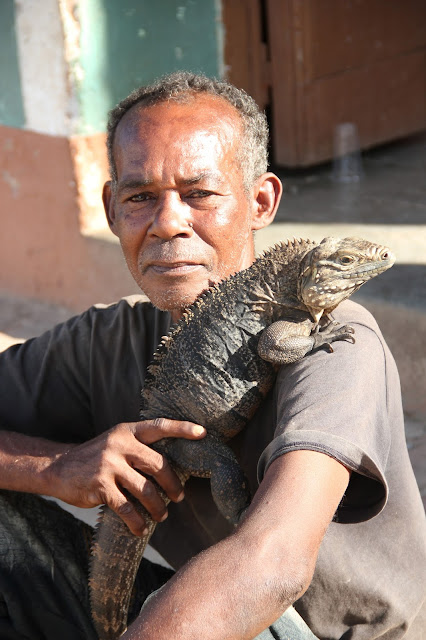 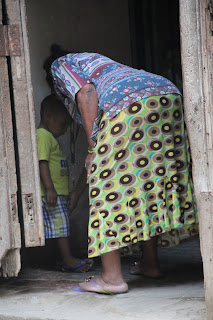 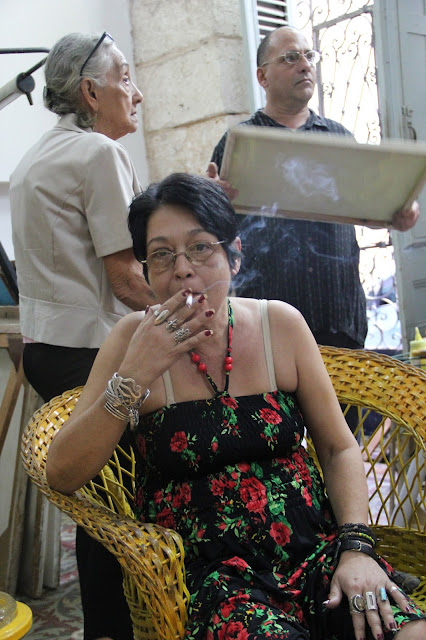 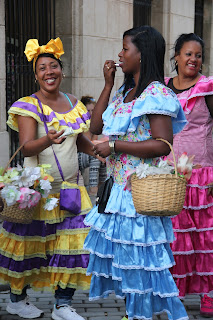 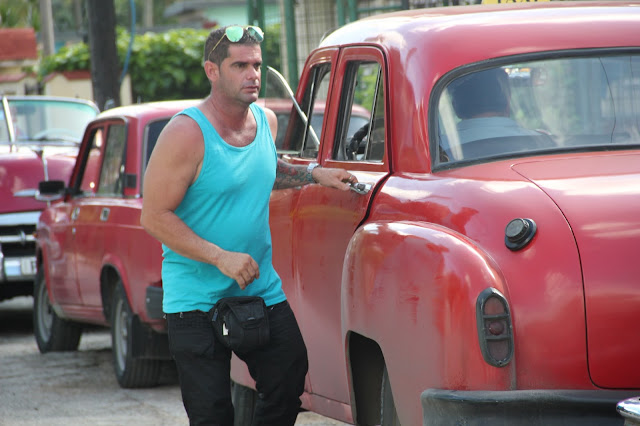 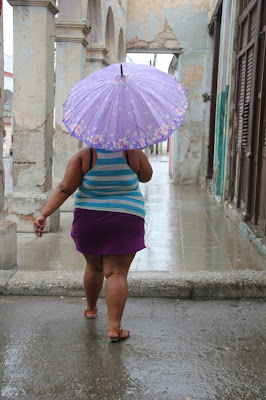 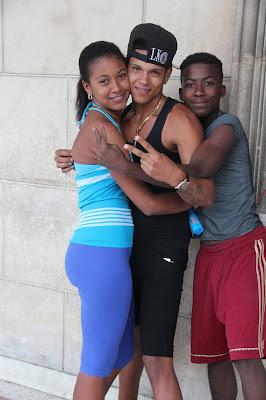