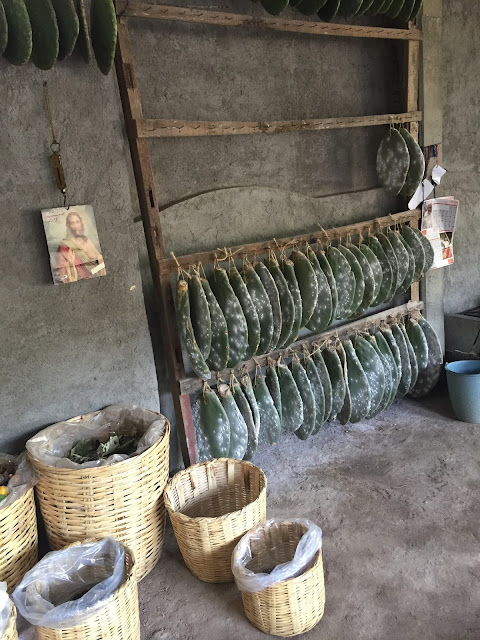 One of the highlights from my trip to Oaxaca, Mexico was being able to take a two day one-on-one natural dyeing workshop with the family of master dyers at Porfirio Gutierrez Studio in Teotitlan, Oaxaca, Mexico. I had met Porfirio earlier in 2016 at the cochineal exhibit at the Bowers Museum in Santa Ana, California and therefore very interested to learn to make red dye from the cochineal bug.  So I was excited when I entered the outdoor work area and spotted the cochineal infested prickly pear cactus paddles hanging from racks.

I learned that after a few months, the bugs are scraped off of the cactus.  A colander is used to sprinkle the powdery babies on to new cactus paddles where they attach and feed.  After two months, the males get wings and fly away to find mates after which they die.  The remainder of the bugs on the cactus are female which hatch new babies. In the colander remain the female bugs which are then dried in the sun and later ground with a metate grinding stone to reveal the red dye source. 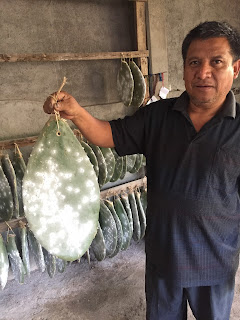 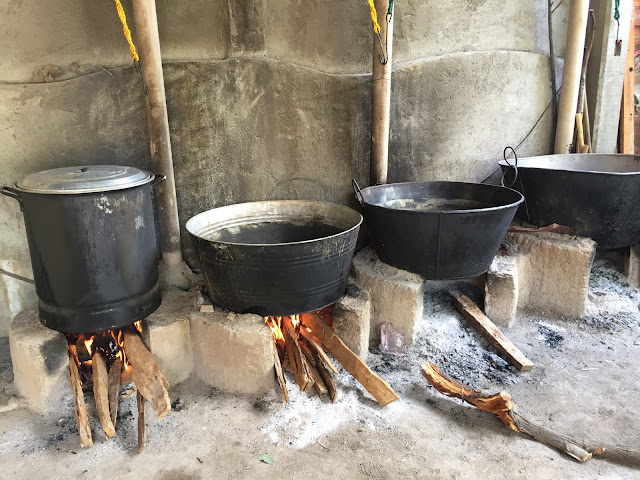 Several vats were heated up to prepare for the dyeing process.  The wool was first washed and then most of it was mordanted in alum.  A nixtamatic (corn grinder) was used to grind the alum.  We dissolved the alum (15% to the weight of wool, i.e. 150 grams of alum for 1 kilo of wool) in a bit of hot water and then added more water.  The wool was added to the pot, simmered for 1-2 hours, taken off the heat where the wool sat in the covered vat overnight. 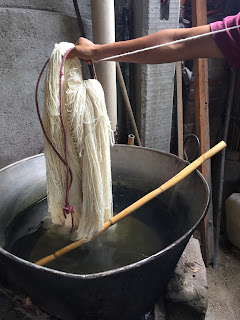 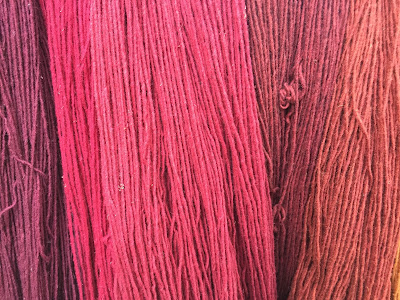 YELLOW:  We made a yellow dye by boiling pericon (tarragon) equal to 15% of the weight of wool for 1 hour (100 degrees C) to extract the color.  Then remove the plants, add the pre-mordanted wool, simmer for an hour or so.  Remove from heat, cover and remain in the pot overnight.

RED:  We put the cochineal bugs (15% of the weight of wool) in a small mesh bag tied at the top and added boiling water to dissolve the bugs so that the shells would not touch the wool. Add this to the pot of boiling water, add the wool, boil one hour.  Remove from the heat and let the wool remain in a covered pot overnight.

After the dyeing, there is a lot of washing in 3-4 different vats.  Ring out each time and then hang it to dry.