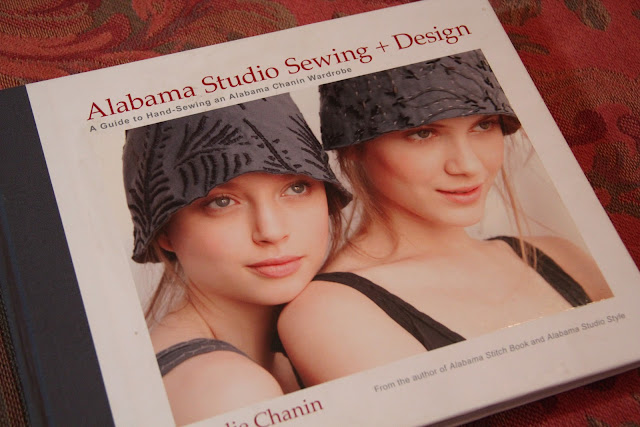 Later this week we're heading down the Baja for our biennial whale watching trip not only to hopefully catch some up close and personal time with the gray whales but also to get in some relaxing, fun filled days and evenings sloshing down margaritas and enjoying authentic Mexican cuisine with some old and new friends.

We'll be flying down in Joe's plane along with another couple, Joe's long time high school friend and his wife.  Two or three other planes will also be making the trek for a total of ten adventurers in our group.  We're going to be doing a lot of legs since we'll be staying at four different places in addition to the short flight from Mulege to to San Ignasio Bay where we'll boarding small boats for the thrill of seeing the whales. Last time we went, we actually got a chance to lean over the boat a kiss a whale!

Of course I need something to do in the airplane but having my head in a book is not sociable acceptable. I usually knit but thought I'd do something completely different for a change...some hand sewing. I took an eco printing workshop with India Flint this past May.  One day she wore this really cool but simple, body hugging cotton jersey dress that she had hand stitched and eco printed.  Upon inquiring, she told me it was a pattern from Alabama Chanin's book which I immediately ordered on-line.  The concept is that the patterns, included at the back of the book, are elegantly simple and designed to be totally hand stitched from organic cotton jersey which can be purchased on line at the Alabama Chanin site.  These garments can be enhanced in any number of ways with additional hand stitching, applique, beads, etc. and the pictures in the book are visually stunning. 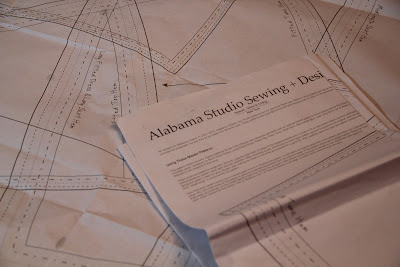 Several patterns are included in the back of the book. 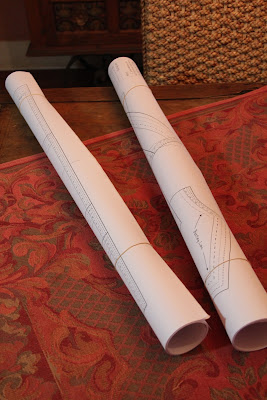 I did a little looking around and found Tangerine and Turquoise, a blogger who wrote about the Alabama Chanin dress that she actually made - BTW it is a stunner.  Some of her information was invaluable including looking for a shop who does large format/blueprint copies.  Never even knew that type of thing existed but guess I never really thought about it before.  Found a place on line and off I went just a few miles from home to Ecovantage Reprographics in Signal Hill who quickly made several copies of the large patterns for me.  I needed several copies since the patterns that come with the book overlap each other. 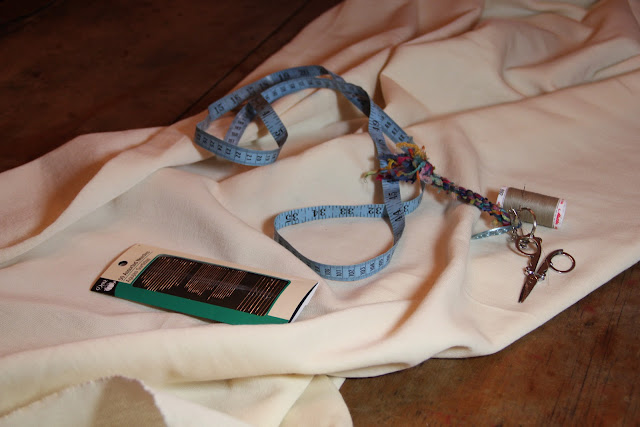 I am using a soft, fine wool interlock for my dress since that's what I have on hand. 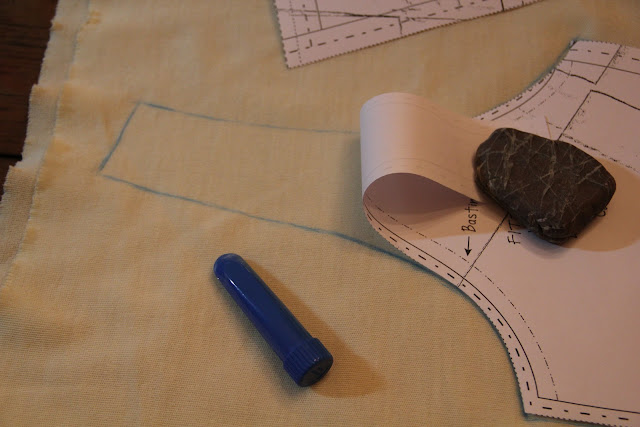 I stopped off at my local Long Beach sewing shop, SewVac, to pick up some button craft thread (or their version of it)and a chalk to mark the pattern.  Remember the old tailer's chalk...well, it's come a long way. Something called Chaco Liner was recommended to me and boy was it great. 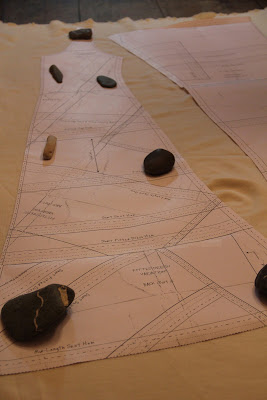 I laid the pattern on top of my fabric.  Held it down with river rocks that I collected at the Russian River last summer and traced around the pattern with my cool new marking tool. 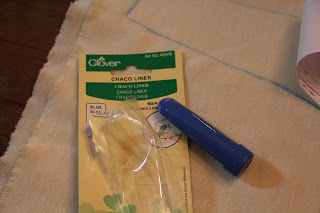 I would totally recommend Clover's Chaco Liner if you need to trace or mark a pattern. 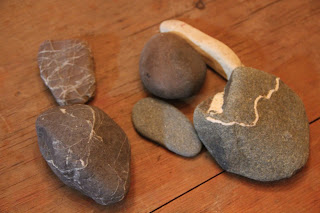 Who needs pins or pattern weights when you can use something from nature to do the job. 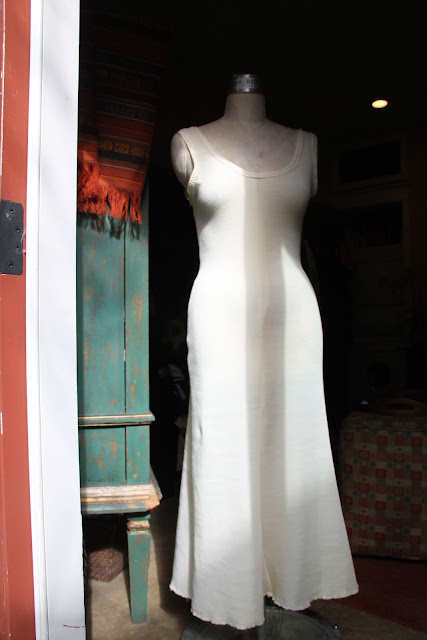 Ok, so my plan was that I'd cut out the dress and hand stitch it while flying in the plane.  Well so much for good ideas.  My wool jersey fabric was unraveling so I decided that I would sew it up (before it completely turned to string) on the sewing machine - Alabama Chanin, I do apologize.  I even did the neck and armhole facings on the machine.  But I do plan to hand stitch flat felled seams so I'm saving that step for my flights.  I am going to eco print the dress before we leave for vacation. 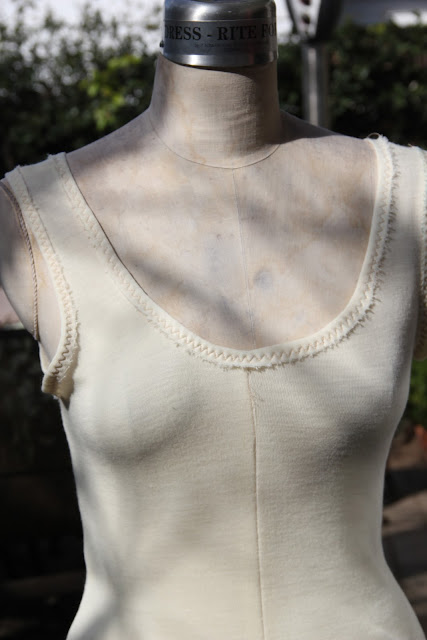 To make the facings, I cut 1 1/4" strips and folded and ironed them in half and then placed them around the neck and armholes.  I think all this machine stitching will keep the wool from unraveling.  Next time, I'm using organic cotton jersey and doing it the full Alabama Chanin method - all by hand! 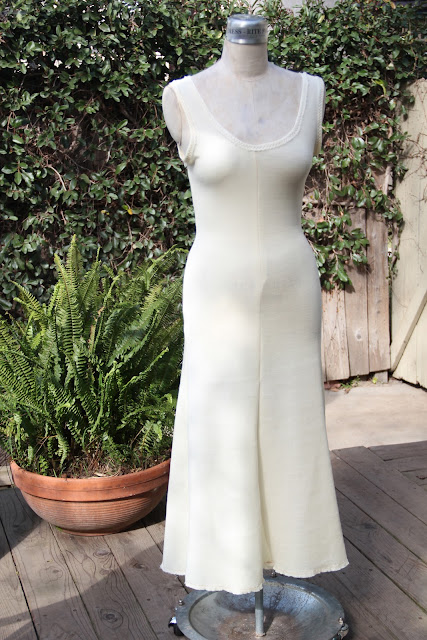 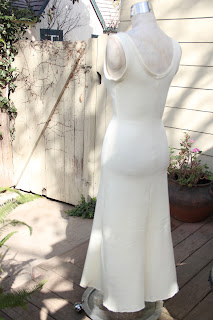 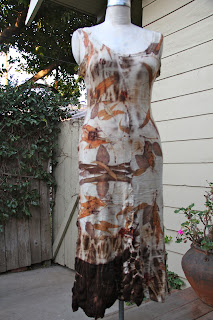